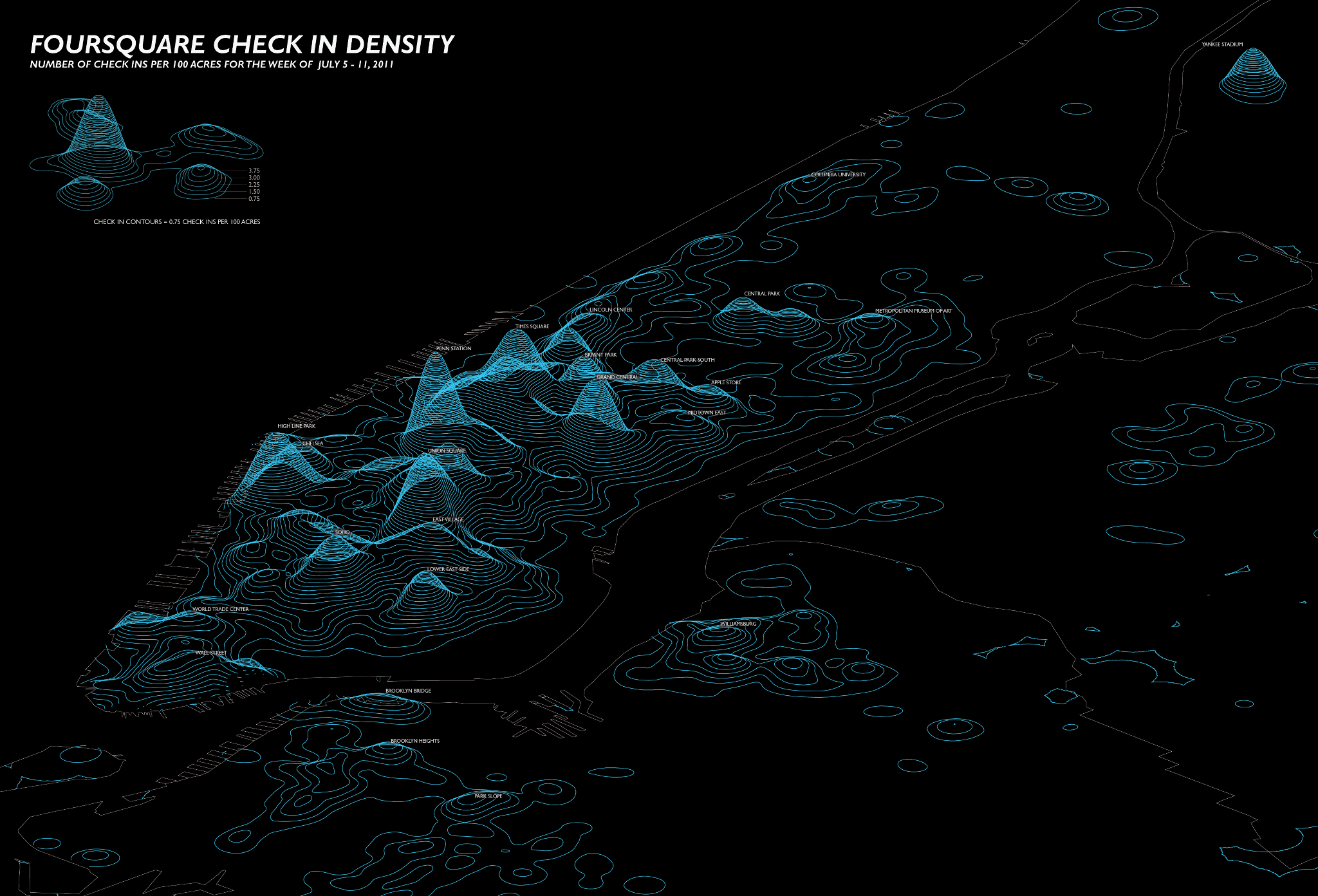 This project was developed at the Spatial Information Design Lab in collaboration with Sarah Williams, Georgia Bullen, Francis Tan and Noa Youse.

Social media are increasingly becoming part of our everyday lives, from connecting with friends and sharing images to exploring cities through location-based applications. These new services have given us a different vantage point from which to understand, explore, navigate, and geographically record the places we live.

Sites such as Foursquare and Facebook allow us to spatially mark our explorations in the city, creating rich databases that hold digital imprints of our interactions. To analyze these traces, the Foursquare and Facebook Application Programming Interfaces (API’s) were used to access location-based data to determine where social media users broadcast that they are “Here Now”. Analysis of this geographic data exposed the psycho-geography and economic terrain of New York City’s social media users. 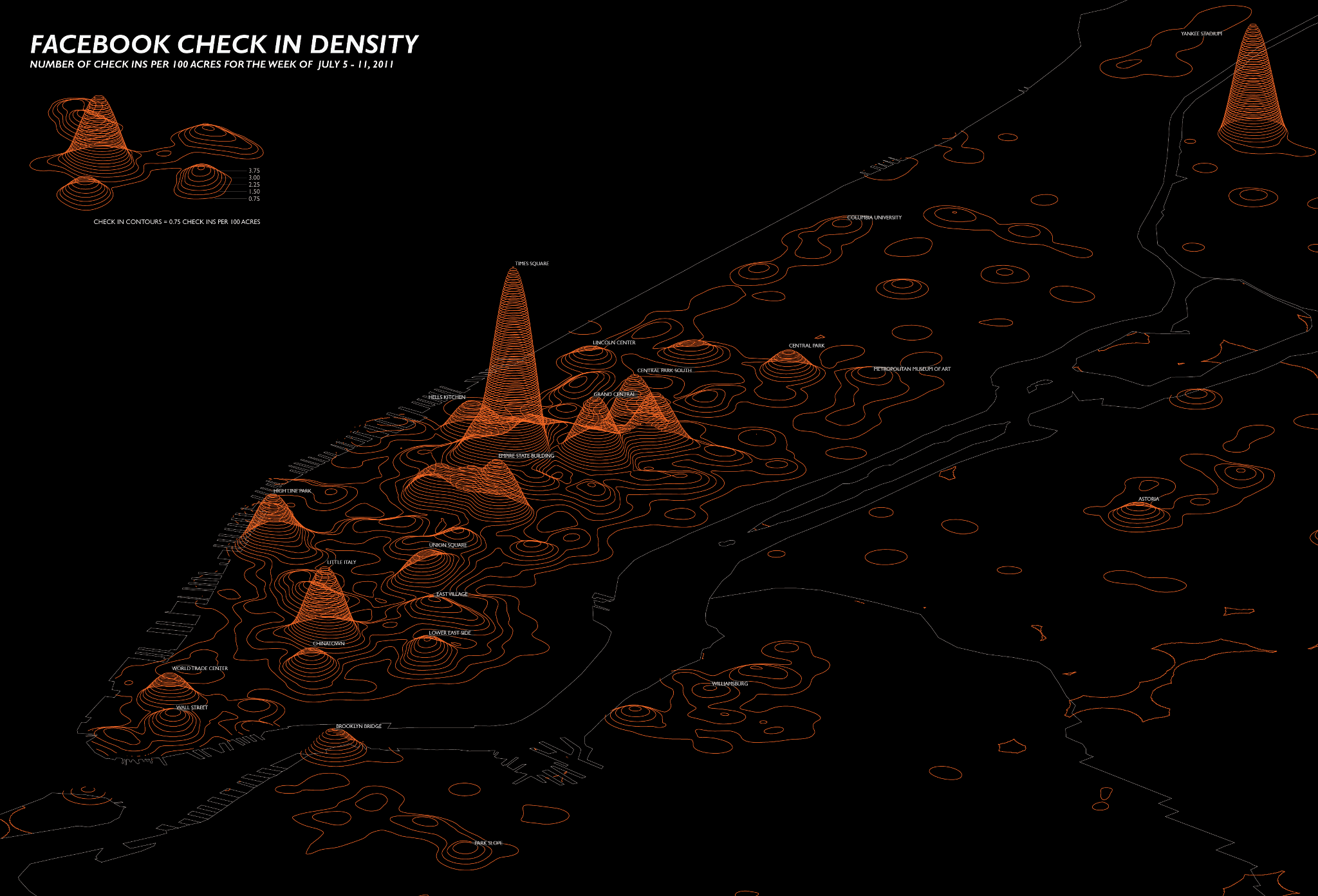 Social Media App users register far more than what they are doing, they also show what they are feeling. Users reveal when and where they are going through an emotional crisis, experiencing their own personal heaven or hell, an “apocalyptic” event, or simply having a good time. Overlaying this data with more traditional government data sets exposed the economic patterns inherent in the way these applications are used. For example the majority of “check in” data comes from areas in the city that have the highest ratios of commercial use. 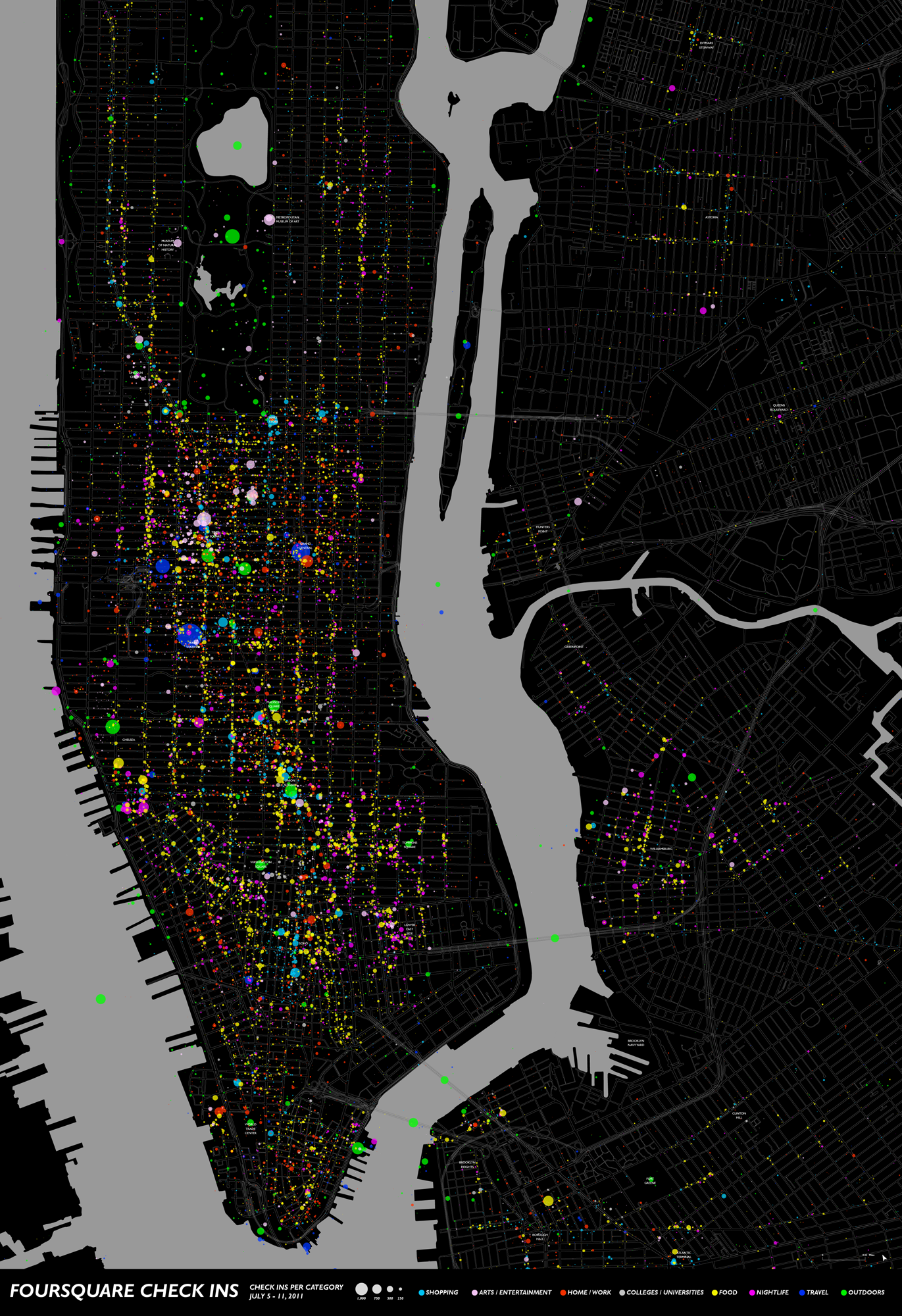 The motivations behind these broadcasts vary between the two social media sites. Foursquare users tell us more about the mundane nuances of life – where their bed is, where they get their morning coffee, or where they work. While Facebook users tend to use the site to brag about the iconic places they have been to, Times Square, Little Italy, or the Empire State Building. Both sites tell us how social media users explore the city or more importantly how they broadcast their exploits. 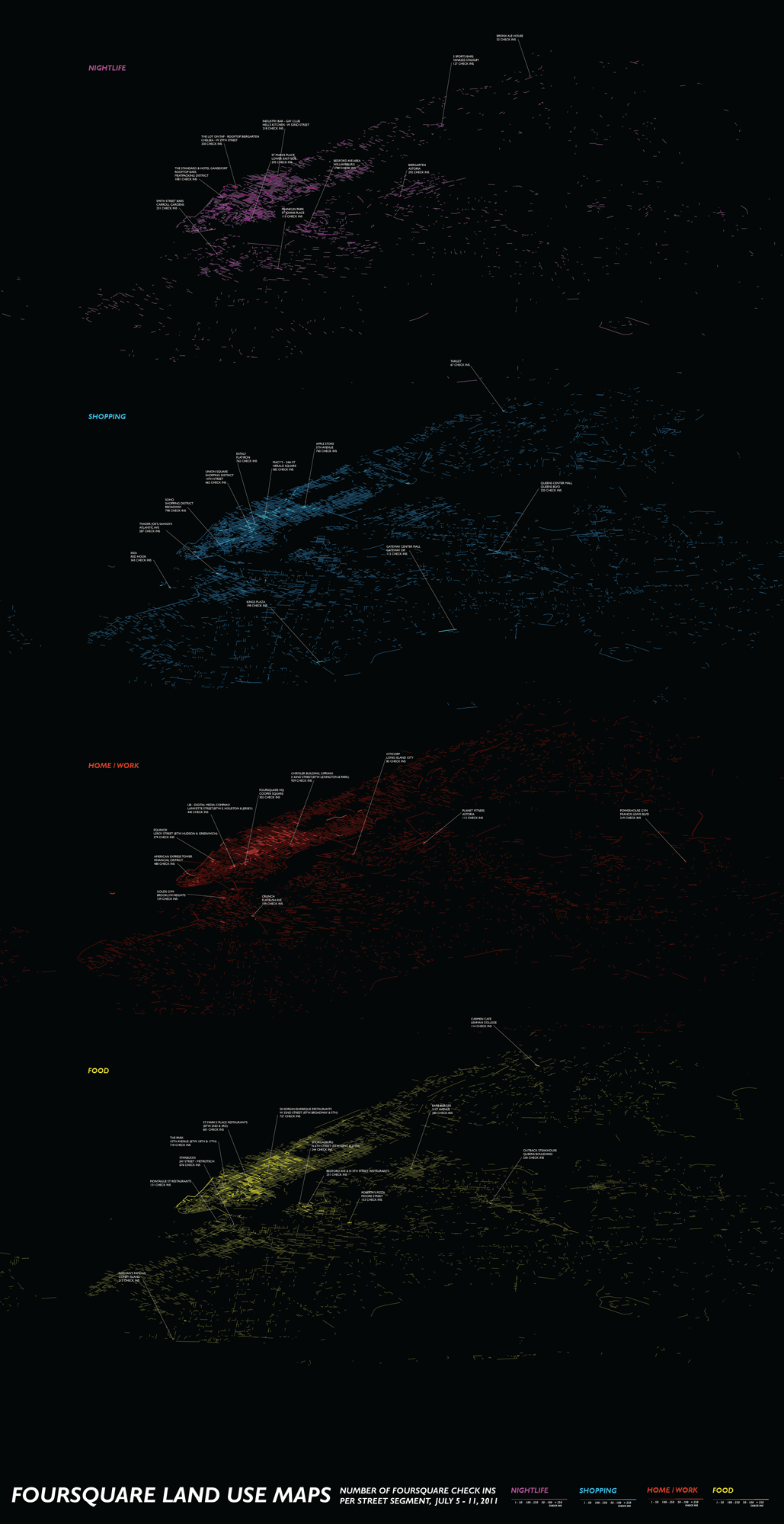 Foursquare users tell us how they feel but they also provide valuable land use and economic information for cities where this information can be hard to obtain. These maps of Mexico City, Moscow, Mumbai, Rio de Janeiro, Beijing, and Tokyo allow us to compare how Foursquare users operate in these cities, but more importantly expose urban economic patterns that might not otherwise been seen. 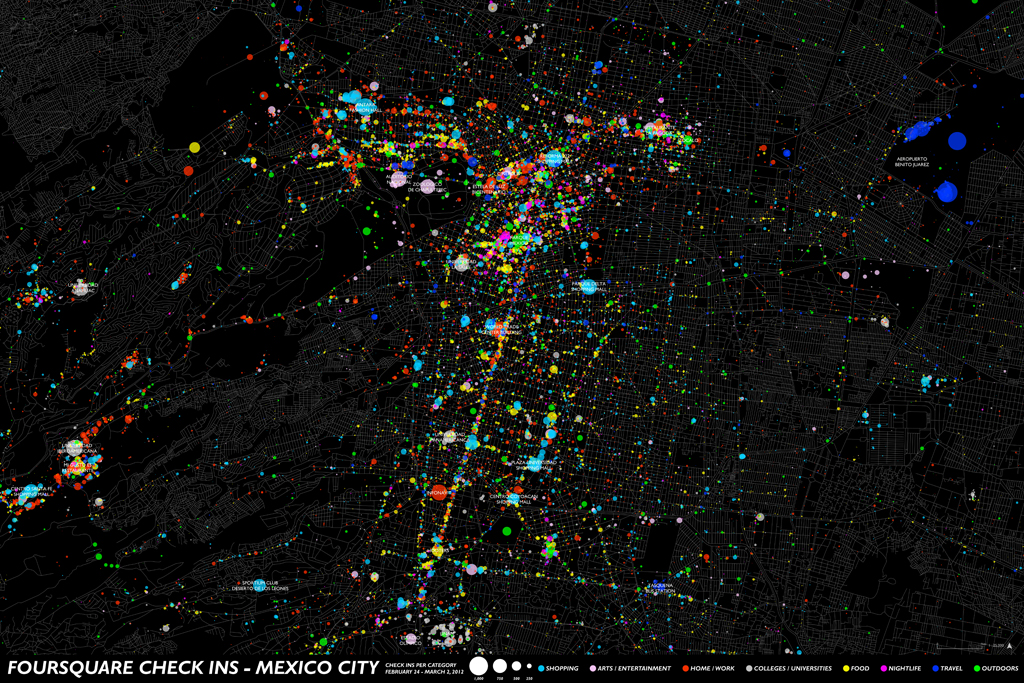 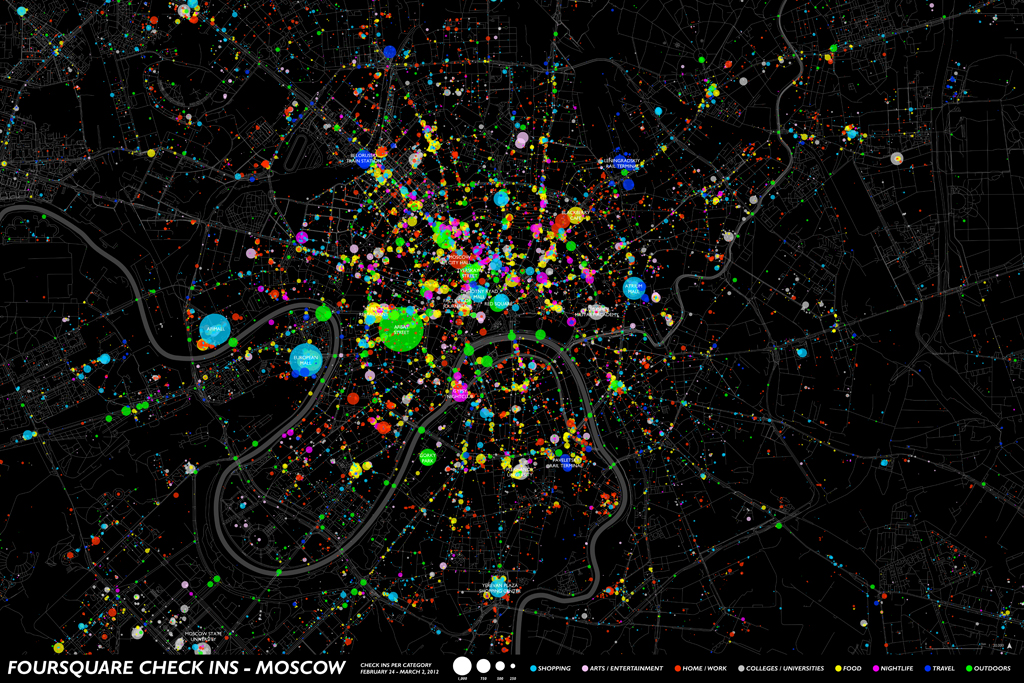 Foursquare is used more in Moscow and Tokyo than anywhere else and its use in these two cities tells us about the cities’ culture while exposing the underlying urban economic patterns in each city. Moscow’s famous arteries are delineated through the check-ins, as are the Mega Malls that have recently become a popular urban form. Tokyo’s transit oriented development patterns are clearly visualized as check-ins of all types cluster around transit nodes. In Rio de Janeiro, we can see the difference between the commercial district in the north and the beach culture of Ipanema in the south. Mexico City’s data exposes its main drag, Insurgentes Sur. The maps show that Foursquare is not used as much in Beijing and Mumbai, but the places it is used are largely locations where there may be foreign visitors – perhaps the technology hasn’t been picked up by local people in both of these communities. 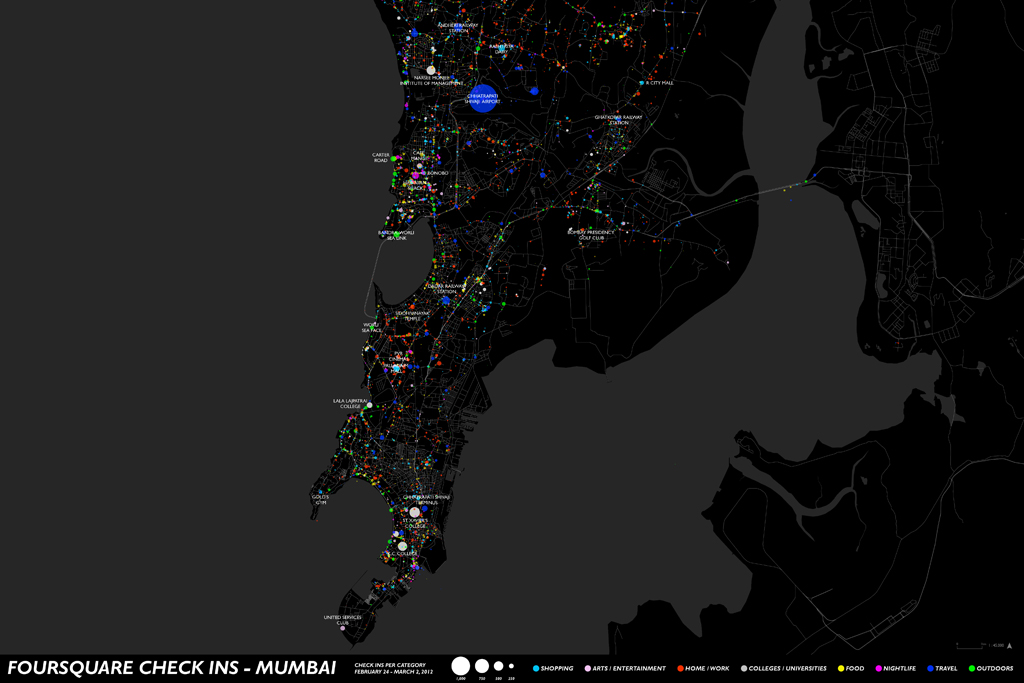 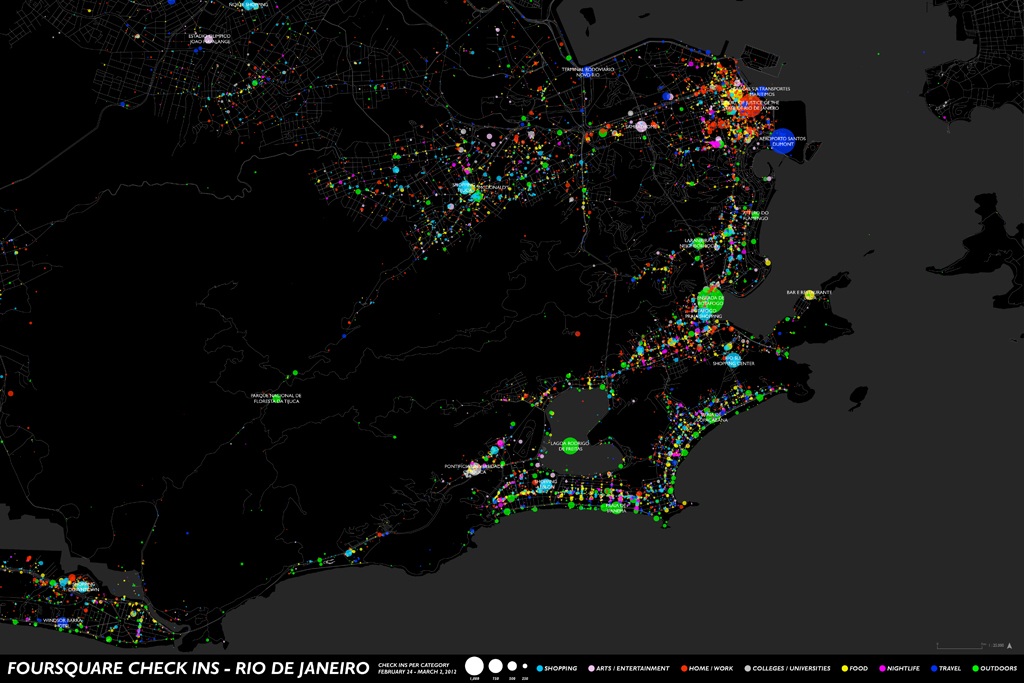 Looking at these global cities provides a sense of how people travel around the city, where there are employment and commercial centers, and seasonal preferences – such as the indoor malls in Moscow. In Tokyo and Mumbai, the infrastructure of the transportation system is clearly visible as the nervous system of the city. Social Media can provide rich data about urban form and land use which is otherwise unavailable for many cities around the world – providing a new tool for research about how people respond and interact with cities in a way never before achieved. 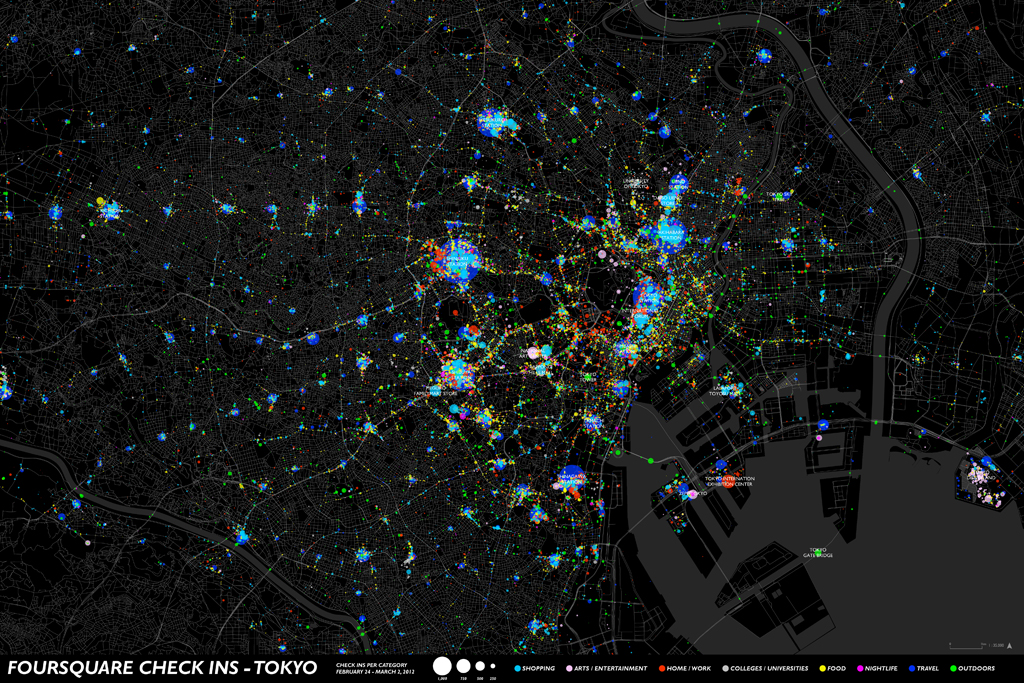 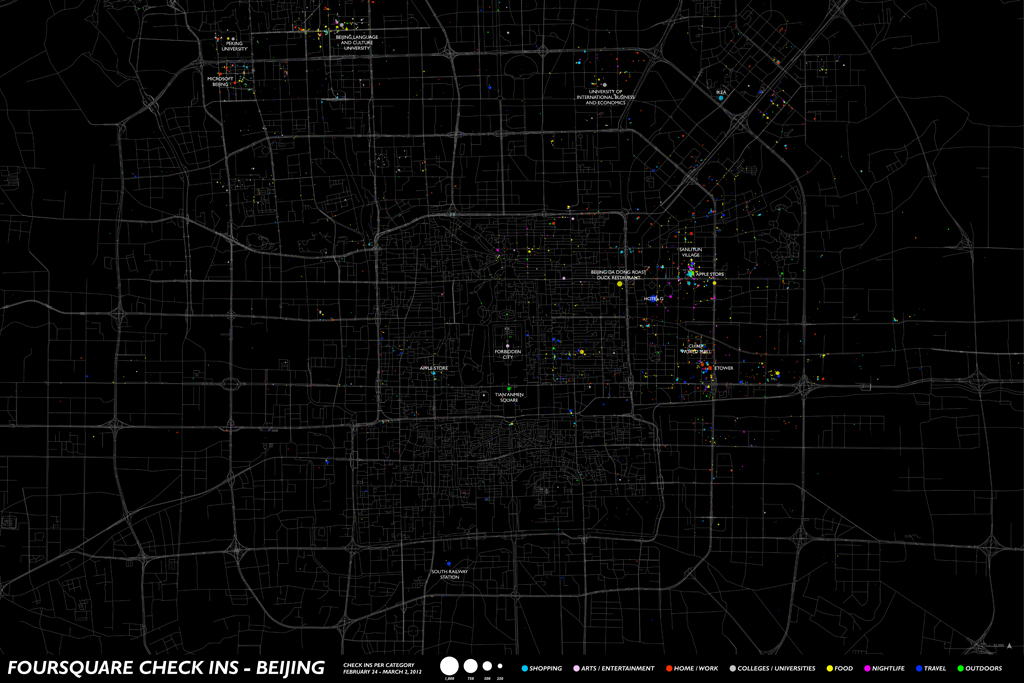